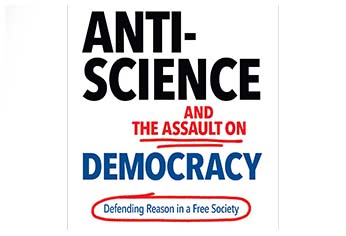 A new book out this December, “Anti-Science and the Assault on Democracy: Defending Reason in a Free Society,” edited by Michael J. Thompson, a political science professor at William Paterson University, and Gregory R. Smulewicz-Zucker, a doctoral candidate in political science at Rutgers University, is one of three book recommendations from the editors of Scientific American in their December 2018 issue.

“The genesis for the book began as it became increasingly obvious that science is coming under attack as ‘elitist’ and dismissed by citizens and political pundits alike,” says Thompson. “The dismissal of global warming and other social science findings are major deficits in a modern society. My co-editor and I saw that science and democracy are linked in modern history, and we asked some prominent scientists, political scientists and philosophers to address the relation between science and a healthy democracy.”

The book is a collection of original essays by experts in political science, the hard sciences, philosophy, history, and other disciplines as they examine contemporary anti-science trends, and make a strong case that respect for science is essential for a healthy democracy.