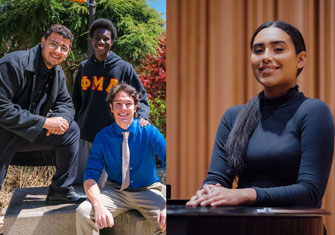 “This a tremendous testament to the talent, dedication, and preparation of these students, each of whom went through a rigorous audition process and competed against students from top music programs across the country and around the world,” says Christopher Herbert, vocal area coordinator and assistant professor of music. “To have four students from William Paterson accepted to such high-level programs also demonstrates the growth and strength of our vocal program.”

Martinez, who is graduating in May 2022 with a bachelor of music degree in performance, was accepted into the Trentino Music Festival in Trentino, Italy, where she will study voice, receive coaching from world-renowned artists, and perform the role of the Third Lady in Mozart's Die Zauberflöte. The Trentino Music Festival, which runs from June 26 through July 31, 2022, is considered to be one of the highest-level opera studies festivals in Europe.

“Being surrounded by a positive community of musicians, faculty, and colleagues has helped me refine my craft and become the best version of me,” says Martinez, who performed the role of Cherubino in the Music Department’s recent staging of Mozart’s Le nozze di Figaro. “I'm looking forward to the future and being able to apply everything I've learned and discovered during my time here.”

De Los Santos, Jefferson, and Montero have been accepted into the Prague Summer Nights Festival, which will be held from June 19 through July 18, 2022 in Tabor, Czechia and Prague, Czechia. The trio will study voice with famous pedagogues, perform opera scenes in Czech, and perform in Mozart's Don Giovanni and Le nozze di Figaro. The performances will take place in the Estates Theatre in Prague, the same theatre where Mozart conducted the premiere of Don Giovanni in 1787.

“I never thought I’d be singing opera,” says De Los Santos, a senior who is majoring in music education and is a tuba player. De Los Santos, who performed the title role of Figaro in William Paterson’s production of Le nozze di Figaro, has been cast in the role of Antonio in the production of Le nozze di Figaro in Prague. “I love performing and making music,” he adds. “I am living the dream.”

Jefferson, a junior majoring in music performance, says he has always wanted to be on Broadway, and was introduced to opera at William Paterson. “Not many people who look like me perform classical music,” he says. “My family adores the fact that I am going to Prague. I love to be on stage making music, and this is the next step to being a performer in the real world.” Jefferson performed the role of Bartolo in WP’s Le nozze di Figaro; he will perform the role of Antonio in the Prague production.

Montero, a junior majoring in music education, says his family is so proud of his acceptance to the festival. “It’s a great opportunity for me to be involved in something that I never could have imagined,” he says. “It is also a validation that I could have a career in this.” Montero, who performed as the Count in Le nozze di Figaro at William Paterson, has been cast as the understudy for the Count for the performance in Prague, and will perform the role of Masetto in Don Giovanni there.