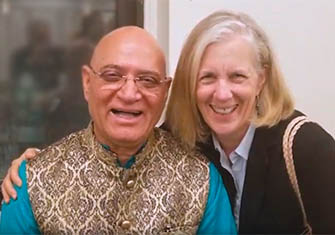 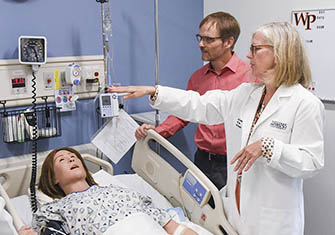 William Paterson University nursing professor and alumna Sandra Foley DNP ‘19, a former longtime emergency room nurse, knows all about stress and has a little-known tactic to beat it: laughter yoga.

To help the WP community de-stress as the semester winds down, Foley will be leading a laughter yoga session live on the University’s Facebook page this Friday, May 15 at 3:30 p.m. She encourages all students, faculty, and staff to take part remotely.

“I’m excited; I am very excited to do this for our whole community,” Foley says. “There’s scientific evidence that laughter yoga, which was started by a physician, works. It’s silly, but it works.”

Laughter yoga, Foley concedes, is not very well known. But she swears by it, and, for that reason, she became a certified laughter yoga teacher seven years ago. The practice—founded in 1995 by cardiologist Dr. Madan Kataria in Mumbai, India—relies on breathing exercises and, of course, laughter. Though the laughter begins as a sort of unusual group exercise, it starts to become contagious and natural. There are more than 20,000 laughter yoga clubs internationally today.

The increase in oxygen to the body and brain after laughing for prolonged periods leads to feeling more energetic, and experiencing a decrease in stress hormones, pulse rate, and blood pressure, Foley explains. Some studies also point to increased functioning in the immune system.

“Your brain doesn’t realize if you’re laughing at a joke or laughing just to laugh,” she adds.

For her doctoral thesis, Foley conducted a mixed-method study on other emergency room nurses in a New Jersey hospital, leading laughter yoga classes for them on-site at the end of their 12-and-a-half hour shifts. Getting tired nurses to participate in something they weren’t familiar with had its challenges, Foley says, but the end result “was quite phenomenal.” The qualitative portion of the study revealed that nurses who joined Foley for the laughter yoga classes felt less stress as a result, and  reported the newfound ability to let go of their cares and think more positively overall.

Foley still visits the same hospital to provide clinical instruction to William Paterson nursing students. She says operating room nurses there, who she briefly met six years ago when she taught a laughter yoga class in honor of Nurses Week, still come to her requesting another class, recalling how Foley’s past session helped them relax.

Foley uses laughter yoga in class with her students—“They think I’m nuts, but they love it,” she explains—and with groups of students who she proctors for exams. She also leads laughter yoga sessions as part of a moral support group she runs for nurses through the New Jersey State Nurses Association.

In mid-March, when the COVID-19 pandemic grew to full force across New Jersey, Foley decided her colleagues in the nursing department could also benefit from laughter yoga. She started a twice-weekly virtual social meet-up/laughter yoga session for WP nursing professors via Zoom.

“I had never done a laughter yoga session in the department, and it isn’t the most recognized practice. To have them coming to me afterwards with thanks, and coming back each week for more—that really speaks volumes to me, and shows me laughter yoga is valued and beneficial,” Foley says.

“I’ve seen faculty on Zoom doing laughter yoga that I never imagined in a million years would be doing laughter yoga,” says nursing professor Kimblery Dimino. “It’s been very transformational, and very special. Dr. Foley has shown us how important it is to be supporting not only our students during this difficult time, but also each other, as faculty. In leading these virtual meetings, she is building hope and resiliency.”

With her fellow nursing professors cheering her on, Foley hopes to bring some of that same energy to the rest of the William Paterson community through her laughter yoga session on Facebook.