Wilkerson was invited to an exclusive gathering with WP communication professor Rob Quicke, the founder of World College Radio Day 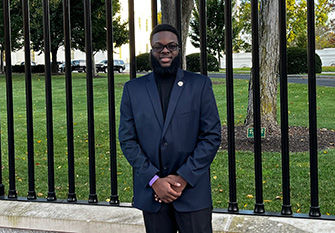 Nicholas Wilkerson outside the White House 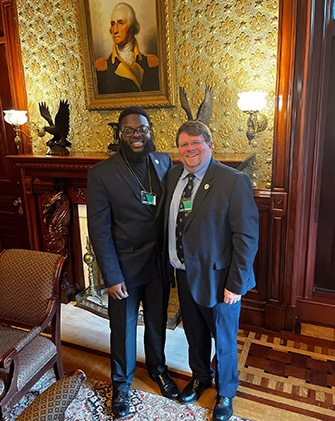 Wilkerson, a communication major and native of Teaneck, New Jersey, serves as WPSC FM’s event and promotions director, and is also a volunteer US board member with World College Radio Day, an annual event founded 12 years ago by William Paterson University communication professor Rob Quicke.

In honor of World College Radio Day 2022, Wilkerson and Quicke were invited to the White House as part of a group of about 15 people—students, faculty, and staff from across the United States representing the best of college radio, each who was awarded a medal for their great work in that arena.

During the visit, the group met with top White House officials—including Vice President Kamala Harris, whose appearance was a surprise; White House Press Secretary Karine Jean-Pierre; and Deputy Director for the National Economic Council Bharat Ramamurti, among others.

”I actually had my notes with me and because of that, I was able to get my thoughts together really quick and prepare, and was able to deliver a question to Vice President Harris and ask her about what was going on,” Wilkerson explains, crediting the WP communication department for teaching him the importance of note-taking and preparedness as a member of the media.

“One of my proudest moments at William Paterson University has to be witnessing our student, Nicholas Wilkerson, talking with the vice president of the United States,” Quicke adds.

Wilkerson and Quicke’s visit to the White House followed a letter Professor Quicke received from U.S. President Joe Biden on October 7, that said, “The dedication and hard work of college radio truly make our world more informed, interesting, and creative … As you celebrate the 12th anniversary of World College Radio Day, I hope that you continue pushing the boundaries of radio programming, sharing your passions and interests, and speaking up for the causes you believe in.”

”My experience going to the White House was truly an amazing one, and I wouldn’t trade it for anything in the world,” Wilkerson says.