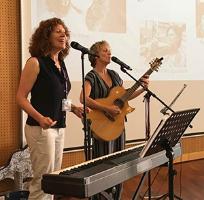 Natalia Zukerman and Lisa Ferraro have been friends for a long time. Recently, they recognized that collaborating might lead to an elevated force in their creative lives and while still in its nascent stage, their combined efforts are proving to be undeniably powerful, infectiously joyful and deeply connected to Spirit. The collaboration is SeekHer7: collaborative, conscious, collective gatherings with meditation, music, movement, learning, co-creating, deep listening, respectful, safe discovery and above all, boundless joy.

Musician, painter and educator Natalia Zukerman grew up in New York City. Having released eight independent albums on Weasel Records and her own label Talisman Records, Zukerman has toured internationally as a solo performer since 2005. Her music can be heard on the soundtrack of several seasons of The L Word and ABC Family's Chasing Life. Among other notable work, Natalia has been a Cultural Diplomat for the US Department of State since 2017, playing concerts and conducting workshops with her trio, The Northern Lights, throughout Africa. In March, 2020, Natalia co-produced an online music festival called Shut In & Sing which ran for 8 weeks and provided immediate financial relief to hundreds of independent musicians at the beginning of the lockdown. Since then, she has been performing livestream shows, teaching songwriting, coaching, running an integrative wellness platform, painting, gardening, has become a certified yoga teacher and is the artistic director for the conscious global community, SoulCall Global.

Lisa Ferraro started singing professionally at age eight. She has recorded and performed nationally and internationally with big band jazz ensembles, rock and soul bands, and in a duo with vocalist and guitarist, Erika Luckett.  She has released 10 albums that have rode the spectrum of music from modern rock and ballads to jazz standards. One of her recordings, “Jazz Up the Holidays,” was nominated for an International Independent Music Award in 2006. Her latest expression, Serenading The Moon, culminates in a collaboration with some of the finest players on the jazz scene today: legendary saxophonist Houston Person, Lewis Nash on drums, Ray Drummond on bass, James Chirillo on guitar and John DiMartino on piano. As a composer, Lisa Ferraro has written music for ABC TV’s Wife Swap; Polygram Films; and the play The Other Side of the River which aired on PBS. A talented songwriter, Lisa was commissioned by Major League Baseball and the Pittsburgh Pirates to write and perform the song, “More Than A Man,” commemorating the late great, Roberto Clemente. Lisa has a distinct vocal style which is soulful, powerful and warm, with a vocal range that exteNatalia Zukermannds over four and a half octaves. In performance, she tries to connect with the audience individually and personally.